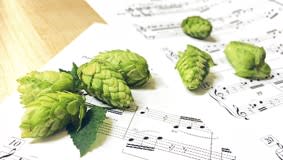 Akin to the water chemistry debate of sulfate and chloride additions for hop forward beers, thiols can also be looked at through the lens of individual concentrations or ratios. Currently at Hoptechnic®, we’ve used overall thiol intensity to guide picking windows for harvest. While this is a useful metric, when observing chromatograms of thiols (Figure 1), it appears that not only does the pure concentration of thiols matter, but also possibly their ratio (or synergy) to one another.

With sulfate and chloride in water, a couple common arguments for ratios are 1:1 and 2:1. Ratios of 1:1, with equal concentrations of both mineral additions the argument is made that this is a “balanced” profile that hops and malt are in tune with one another in flavor. If a 2:1ratio is applied, the bitterness is either intensified (2:1,sulfate:chloride) or softened (1:2, sulfate:chloride), but the overall beer is pleasantly drinkable1. Why would 1:1 and 1:2 ratios create such harmonious results? One possible explanation is these are golden ratios based on Pythagorean Intervals2.

Interested in the cause of positive(consonant) sounds, Pythagoras found a list of intervals (regardless of pitch)that due to common frequency were found to be harmonious. These intervals were based on ratios of stringed instruments that created various frequencies, which are the archetype for the 12 frequency intervals found in the modern western octave. If music composition is derived from physical math, could not the same be said about other natural systems? Instead of strings, consider applying these ratios to thiol peak areas relative to one another.

A few common positive ratios that Pythagoras found were 1:1 (Unison),2:1 (Octave), and 3:2 (Perfect fifth), with others based on these common intervals (major third, tritave, and double octave to consider a few more)3 (Table 1). The gap of these ratios is known as “cents” where a higher number implies a much larger difference in note frequency.

Consider the following chromatograms (orange and red) and some of the major thiols we have identified thus far. The orange chromatogram is more grapefruit/orange driven whereas the red chromatogram is stone fruit/fruit punch dominant (Figure2). To create a thiol ratio, the area of two peaks of interest were first found, and their ratio relative to the total sum was compared ((𝑇ℎ𝑖𝑜𝑙 𝐴𝑟𝑒𝑎)/(𝑇𝑜𝑡𝑎𝑙 𝑇ℎ𝑖𝑜𝑙 𝐴𝑟𝑒𝑎)). When looking at ratios of these major compounds one can see that all of the ratio areas possibly correspond to major pitch ratios except the 9:1 (4MMP:MTH) in the red thiol chromatogram, which could be considered a macrointerval (Figure 3).

In hop aroma, we consider stone fruit/fruit punch aromas to be “fuller” with a lot more stimulation to one’s olfactory system. Grapefruit and orange are sharper “angular” defined citrus flavors. To not get too lost in the rabbit hole, the orange chromatogram has fewer compounds present and thus fewer ratios of thiols which could correspond to that cleaner flavor.

The red chromatogram has a lot more going on with thiols and is “noisier”. Regarding thiol ratios, we anecdotally have observed fixed ratios infield samples during harvest monitoring. It would be interesting to see if ratios of thiols could be used as a guide for hop blending, or even isolating individual thiols to get the desired aroma. Of course, this is just the tip of the iceberg as there are thousands more compounds in hop oil in play; the thiols just happen to be the most pungent.