Where There's a Wildfire, There's Smoke 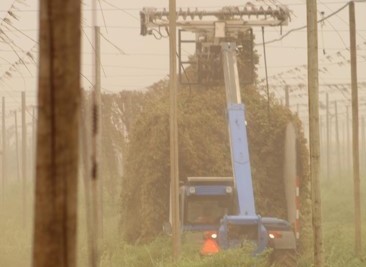 In recent years, wildfires have been found to potentially affect plants hundreds of kilometers from the location of the fire1.Wine grapes harvested following a growing period influenced by wildfires can carry a smoky aroma that is imparted to the wine produced from those grapes. There is evidence that hops are also subject to smoke taint and can pick up distinct smoky flavors, 2.  In 2020,wildfires in the PNW contributed to a perceived amount of smoke taint in some hop varieties. Which has led to further inquiries into the effect of smoke on hop aroma.

How do wildfires affect hops? Is fire affect limited to sensory differences or are there other physiological changes that happen to the hops as well? Is there a change in the inherent microbiome of the hops in smoke years versus non-smoke years that contribute to differences in hop vintage?

For the moment, we’ll stand on the shoulders of giants and say that there is a distinct smoky aroma that can be picked up by the hops in years with heavy smoke present and we’ll direct you to folks like New Belgium Brewing Company and their work2 as well as many others who have a solid foundation on how to track and measure the amount of smoke compounds in hops. We won’t beat that particular drum too much this time around.

What we will focus on is more of how smoke effects the hops in other ways aside from smoke taint. The first heavy smoke year that we have on record in the past five years or so was back in 2017. The Yakima Valley experienced heavy smoke contamination from wildfires in Washington, Oregon, Montana and British Columbia resulting in a culmination of smoke haze over a period of 4 weeks. Though it was smoky, it was still a few weeks before harvest and Hoptechnic® conducted standard harvest timing sampling rotations across Amarillo® production fields.

In 2017, we observed  maturation differences in production fields. Normal production fields begin to mature around the second week of August and follow an exponential growth curve culminating in a harvest ready state one to two weeks after initial development of aromas. However in 2017, we saw delayed maturity where hops were only entering a window of maturity for harvest in the first to second weeks of September, once the smoke had largely cleared.

In the Figure 1, Field A is from Washington and Field B in South Idaho, where the smoke haze was present but less prominent in ’17. Yellow data points correspond to a field sample designated as “pre-harvest”, light green as “early” and dark green as “ready”. What we found was that during the time the Yakima Valley stalled for several weeks and upon clearing of smoke around the first week of September, we saw a sharp and sudden increase in maturity, compared to the normal growth pattern observed in Field B.

Fast forward a couple of years to September 2020 and days of heavy smoke. But unlike 2017, the smoke moved into the PNW much later than before. The result? We saw a distinct and notable delay in maturity over time with a very slow period of growth where harvest date shifted by a full 7 days or more. Figure 2 tracks overall thiol intensity of a hop over time. In this case, we were looking at Centennial maturity over the two crop years. In 2019, Centennial matured and was ready for harvest by the 21stof August; however, in 2020, the maturity date shifted to the 5th of September. Most noticeable is the long, slow increase in overall thiol intensity in 2020.

2020 seems like it was the perfect storm – literally – for creating smoke damaged hops. In looking back at last year’s harvest, we were trying to understand why last year had such a pronounced contamination issue when we didn’t see that in the past as badly. So, we went to someone who knows about hops. Darren Gamache is a 5thgeneration hop grower at Virgil Gamache Farms and we picked his brain about why2020 was so bad for smoke.

We asked if it was just timing, and like us Darren thought not, or at least not entirely. One of our hypotheses was that the air being pushed through the kilns in hop drying was brining more smoke particulates through the kiln bed and distributing smoke taint throughout. But as Darren pointed out, the floor velocity at VGF was only0.5 MPH, so likely there’s not a lot of particulate distribution.  However, this would be dependent on bed depth, fan speed and overall floor velocity, which do vary from farm to farm and could be part of the explanation in certain areas. Then Darren brought up something very interesting.

2020 was smoky, but at the same time that there was heavy smoke in the northwest, we had a windstorm that rolled through at the same time. Looking at weather data from the time, hop growing regions in the northwest saw winds up to 50 MPH and sustained winds that varied from 10-20 MPH. With all the particulate in the air from the dust and smoke, Darren thought it was possible that an increased amount of micro abrasions on the hop cones could result in higher amounts of smoke contamination in 2020due to increased airflow and the likelihood that smoke compounds would come into contact with the lupulin glands and become part of the oil content for a hop.

It’s an interesting hypothesis and one we’d like to work on in the off-seasons as well as something we hope we don’t see in the future. Regardless, smoke contamination is a complex problem with no clear solution yet.