The Science of Terpenes 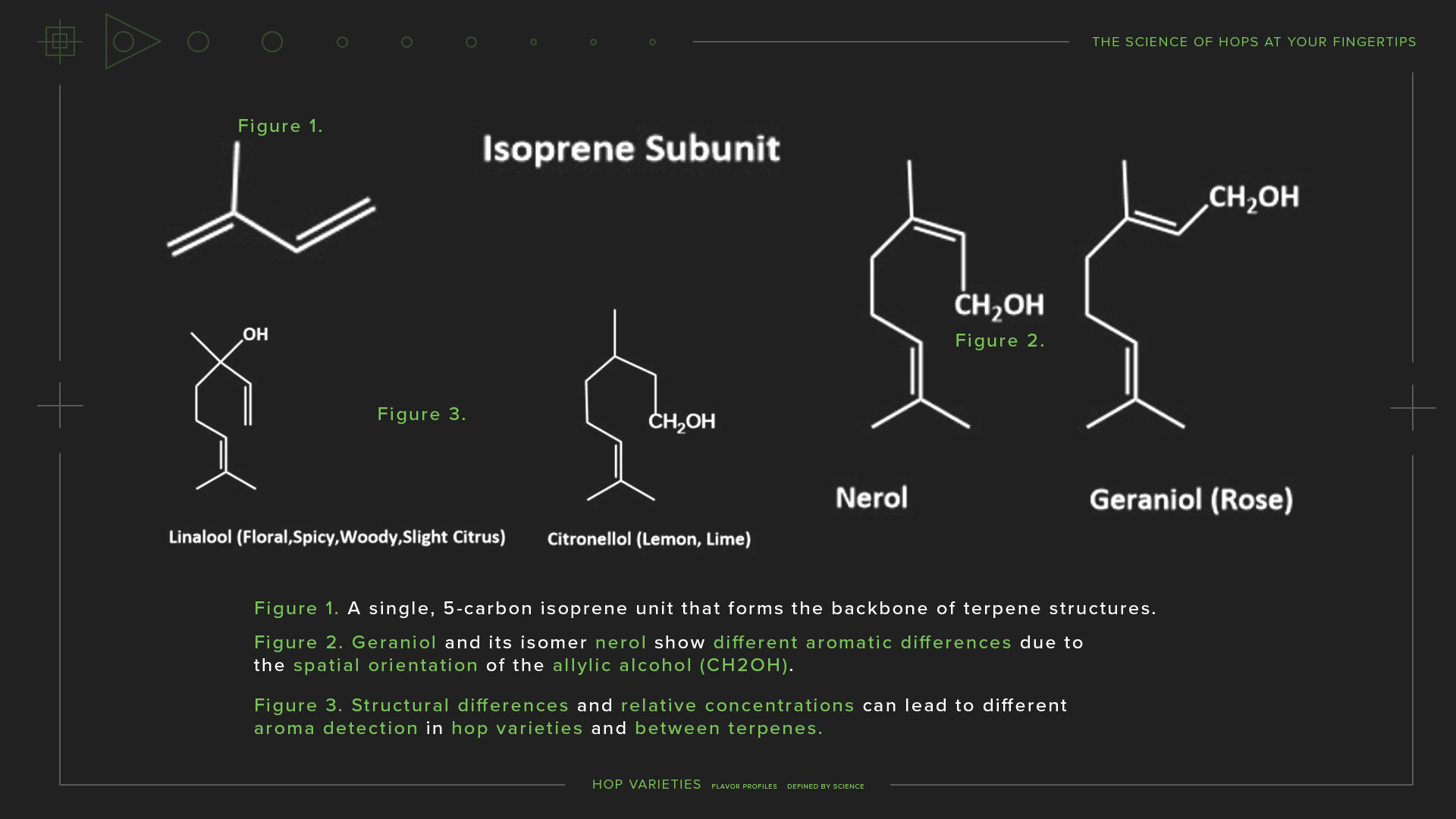 Terpenes are a class of organic molecules commonly found in flowers, fruits, trees and even some insects. In plants, terpenes are often used as a defense against herbivores. In hops, terpenes are synthesized by two monoterpene and two sesquiterpene synthases that are located in the lupulin glands of the plant. These compounds can serve as defense mechanisms for the plant or can serve as secondary messengers to further hop plant development. Hop terpenes most commonly made by the plant are monoterpenes like myrcene and sesquiterpenes like α-humulene.

Terpenes can be grouped into four classes based on their chemical structure. A terpene is comprised of a five-carbon backbone called an isoprene unit (Figure 1). A terpene can be formed by two, three, four or six isoprene units which are called monoterpenes, sesquiterpenes, diterpenes and triterpenes, respectively.

As is often seen in natural products, structure plays a role in function and structural isomers of terpenes may have different aromas. For example, nerol is often described as having a fresher, greener aroma than the heavy rose and floral scent of its isomer geraniol (Figure 2) due to the spatial rearrangement of the CH2OH group (allylic alcohol).

Relative concentrations of terpenes vary with hop variety and contribute to detectable aromatic differences. For example, some varieties of aroma hops have higher relative concentrations of limonene, a terpene known of its citrusy characteristics, while more noble hops have higher concentrations of floral terpenes like linalool (Figure 3). Odor thresholds vary from compound to compound, but in general odor thresholds for terpenes found in hops range from 1 ppb to 50 ppm. Detection levels in beer for terpenes is again dependent on the compound, but tend to range between 900 ppb to 50 ppb. Oxygenated terpenes, like terpene alcohols, often have better solubility in beer than the non-oxygenated terpenes. For example, it may be easier to detect geraniol character in beer than to detect β-caryophyllene.

At Hoptechnic™, we study the terpene fingerprint of hops during harvest to monitor for developing off-aromas and we study the relative concentrations of terpenes to better understand their contribution to hop aroma sensory as a raw product as well as their role in beer flavor.